Lexical conventions in Verilog are similar to C in the sense that it contains a stream of tokens. A lexical token may consist of one or more characters and tokens can be comments, keywords, numbers, strings or white space. All lines should be terminated by a semi-colon ;.

There are two ways to write comments in Verilog.

White space is a term used to represent the characters for spaces, tabs, newlines and formfeeds, and is usually ignored by Verilog except when it separates tokens. In fact, this helps in the indentation of code to make it easier to read.

However blanks(spaces) and tabs (from TAB key) are not ignored in strings. In the example below, the string variable called addr gets the value "Earth " because of preservation of spaces in strings.

There are three types of operators: unary, binary, and ternary or conditional.

We are most familiar with numbers being represented as decimals. However, numbers can also be represented in binary, octal and hexadecimal. By default, Verilog simulators treat numbers as decimals. In order to represent them in a different radix, certain rules have to be followed.

Sized numbers are represented as shown below, where size is written only in decimal to specify the number of bits in the number.

Uppercase letters are legal for number specification when the base format is hexadecimal.

Negative numbers are specified by placing a minus - sign before the size of a number. It is illegal to have a minus sign between base_format and number.

A sequence of characters enclosed in a double quote " " is called a string. It cannot be split into multiple lines and every character in the string take 1-byte to be stored.

Identifiers are names of variables so that they can be referenced later on. They are made up of alphanumeric characters [a-z][A-Z][0-9], underscores _ or dollar sign $ and are case sensitive. They cannot start with a digit or a dollar sign.

Keywords are special identifiers reserved to define the language constructs and are in lower case. A list of important keywords is given below. 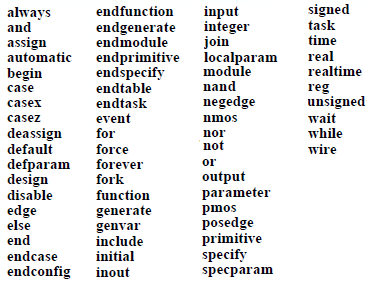 Verilog has undergone a few revisions over the years and more additions have been made from 1995 to 2001 which is shown below.