Ports are a set of signals that act as inputs and outputs to a particular module and are the primary way of communicating with it. Think of a module as a fabricated chip placed on a PCB and it becomes quite obvious that the only way to communicate with the chip is through its pins. Ports are like pins and are used by the design to send and receive signals from the outside world. 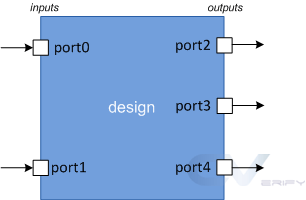 Ports are by default considered as nets of type wire.

Ports declared as inout can act as both input and output.

In the code shown below, there are three input ports, one output port and one inout port.

It is illegal to use the same name for multiple ports.

If either the net/reg declaration has a signed attribute, then the other shall also be considered signed.

Verilog has undergone a few revisions and the original IEEE version in 1995 had the following way for port declaration. Here, module declaration had to first list the names of ports within the brackets and then direction of those ports defined later within the body of the module.

ANSI-C style port naming was introduced in 2001 and allowed the type to be specified inside the port list.

Your feedback on this article.