Statements are wrapped using begin and end keywords and will be executed sequentially in the given order, one after the other. Delay values are treated relative to the time of execution of the previous statement. After all the statements within the block are executed control may be passed elsewhere. 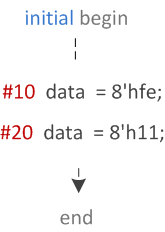 In the example above, first statement in the begin-end block will be executed at 10 time units, and the second statement at 30 time units because of the relative nature. It is 20 time units after execution of the previous statement.

A parallel block can execute statements concurrently and delay control can be used to provide time-ordering of the assignments. Statements are launched in parallel by wrapping them within the fork and join keywords. 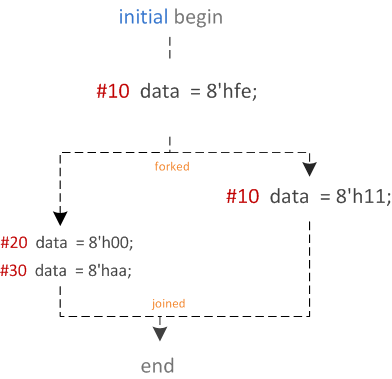 There is a begin-end block in the example above, and all statements within the begin-end block will be executed sequentially, but the block itself will be launched in parallel along with the other statements. So, data will get 8'h11 at 20 time units, 8'h00 at 30 time units and 8'haa at 60 time units.

Both sequential and parallel blocks can be named by adding : name_of_block after the keywords begin and fork. By doing so, the block can be referenced in a disable statement.