What is a driver ?

UVM driver is an active entity that has knowledge on how to drive signals to a particular interface of the design. For example, in order to drive a bus protocol like APB, UVM driver defines how the signals should be timed so that the target protocol becomes valid. All driver classes should be extended from uvm_driver, either directly or indirectly.

Transaction level objects are obtained from the Sequencer and the UVM driver drives them to the design via an interface handle.

Steps to create a UVM driver

1. Create custom class inherited from uvm_driver, register with factory and call new
2. Declare virtual interface handle and get them in build phase 3. Code the run_phase 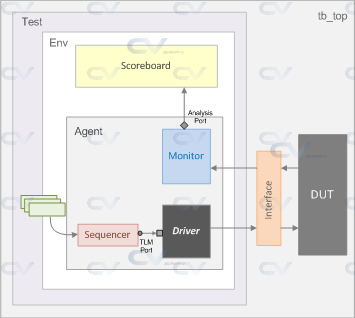 UVM driver is a parameterized class which can drive a specific type of transaction object. The driver has a TLM port of type uvm_seq_item_pull_port which can accept the parameterized request object from the uvm_sequencer. It can also provide a response object back to the sequencer and usually the class type of both request and response items are the same. However, they can be different if explicitly specified.

The UVM driver uses the following methods to interact with the sequencer.

How are driver/sequencer API methods used ?

The idea behind a driver/sequencer handshake mechanism is to allow the driver to get a series of transaction objects from the sequence and respond back to the sequence after it has finished driving the given item so that it can get the next item.

2.get followed by put

The difference between this model and the previous one is that here, the driver gets the next item and sends back the sequence handshake in one go, before the UVM driver processes the item. Later on the driver uses the put method to indicate that the item has been finished. So, finish_item call in the sequence is finished as soon as get() is done.

Note the following from example shown above :

The base driver class contains a uvm_seq_item_pull_port through which it can request for new transactions from the export connected to it. The ports are typically connected to the exports of a sequencer component in the parent class where the two are instantiated.The RSP port needs connecting only if the driver will use it to write responses to the analysis export in the sequencer.

The driver's port and the sequencer's export are connected during the connect_phase() of an environment/agent class.