From our bloggers
Creating Singleton Objects
What's a UVM Queue ?
Command line processing
What is the m_sequencer?
Disable File Name/Line Numbers
Behind the scenes: Factory
Turn an active agent to passive
Timeout value for simulations
How run_test() works
Effective use of RAL methods
Register Model reset()

AMBA APB is a widely used bus protocol by the company ARM Holdings, typically used to access control registers in a design.

The APB is part of the AMBA 3 protocol family. It provides a low-cost interface that is optimized for minimal power consumption and reduced interface complexity. The APB interfaces to any peripherals that are low-bandwidth and do not require the high performance of a pipelined bus interface. The APB has unpipelined protocol.

All signal transitions are only related to the rising edge of the clock to enable the integration of APB peripherals easily into any design flow. Every transfer takes at least two cycles. 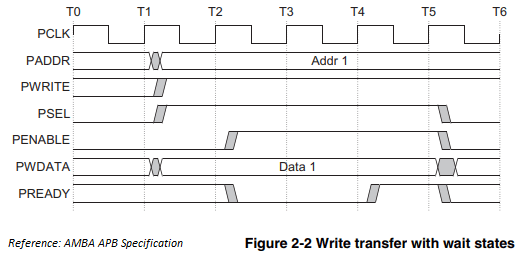 The first phase is called setup phase where an APB master drives paddr, pwrite, penable, psel and pwdata regardless of whether slave is ready which is indicated by pready. Note that penable should always be driven low in the setup phase.

The second cycle is called access phase and is the time when write data is either captured by the slave or read data is provided by the slave. The slave can extend either phase by pulling pready low thereby indicating to the master that it is not ready to accept any transfer at the moment, and is called a wait state. The master should drive penable high in the access phase. 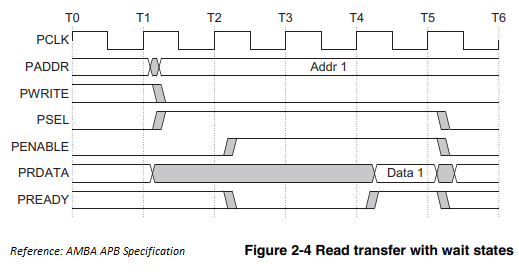 The complete APB specification can be downloaded here.

The interface is used to connect between design blocks that use APB protocol or connect with a testbench. Hence the interface should have all signals supported within APB protocol specification. The clocking block is primarily used by testbench to sample and drive signals relative to a clocking event, which in this case is the positive edge of pclk.

APB signals can be grouped into either control or data signals. pwdata and prdata are data signals while rest of it decide how an APB master should initiate a transfer. Based on this protocol, there are only 4 signals that really need to be driven with random value which are paddr, pwrite and the two data signals. All other signals has to be driven with a fixed value based on protocol definition and hence do not need to be randomized as a transaction object.

This seqeunce item will be started on an APB sequencer, which ultimately gets driven onto the bus by an APB driver.

Your feedback on this article.